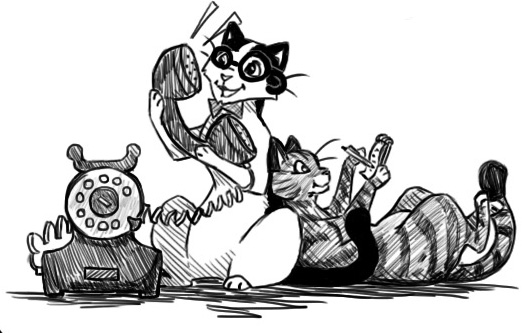 “Who was that?” Kayla asked.

Andrew frowned and looked around. “Who was who?”

“That gorgeous guy who walked past your door.”

Andrew got up and walked over to the door. When he came back to the video chat, he was grinning. “I wondered why you mentioned him when you’ve never mentioned any of the other guys that go by. That was Dab.”

“Dab?” Rebecca asked, pronouncing it as Andrew had, Dawb.

“He’s from Yemen. Daabar Hassan. And yes, girls think he is pretty, that’s for sure. They pay a lot of attention to him.”

Andrew shrugged. “I got no reason to be jealous. He’s a good guy and anyway, I have you. He can have all the rest of the girls. I don’t need them.”

All he could do was grin. Then he turned as someone else came into the room. “Hey, Ryan. Do you want me to take this call in the lounge?”

His roommate, Ryan Meyers, leaned over to smile at Kayla and Rebecca. “Hello, ladies.”

“Hey, Ryan,” Rebecca said. “Aren’t you supposed to be leading a study group?”

He chuckled. “You know my schedule better than Andy, here.”

Andrew rolled his eyes at the nickname. “Your schedule, your business. Are you back to study?”

“Not tonight,” Ryan said. “I’m heading to the library, but need a notepad.”

“With this girl, I do. She’s all about analog.”

Andrew spun in his chair. “A girl? You’ve been here a little more than a month and you’ve got a girl?”

“You had one when you got here. This took too long.”

“Are you a love ’em and leave ’em kind of guy?” Kayla asked.

Ryan bent down, mortified when he looked at them through the screen. “Who, me?” He smacked Andrew’s back, spinning the chair back around. “Would I do that?”

“I don’t know,” Andrew said. “Would you? I haven’t known you long enough to make a judgment.”

“No. I’m definitely not that guy. Sherise is in Rhetoric with me. I’ve asked her out three different times. Tonight, she decided that we could go to the library together. Buh-bye, study group. I’ve got a girl to court. I hate to smile and run, but I need to move it. If I’m late, she might never say yes again.”

Ryan could be seen moving around the room. Both Rebecca and Kayla watched from their phones.

Finally Rebecca whispered. “Do you know this Sherise?”

Andrew pointed at his chest. “Me?”

She chuckled. “I certainly didn’t mean Kayla and we’re all assuming that Ryan knows her.”

He shook his head. “I don’t think so. You know, the university is a little bigger than Bellingwood. Last I heard, there were more than twenty thousand undergrads. I’m supposed to know one random girl?”

“Hopefully, you’ll meet her,” Ryan said, bending in once more. “See you girls later. Don’t keep him up too late. He’s grumpy when he doesn’t get enough sleep.”

Ryan stood in the doorway and shook his head. “Not touching that one with a ten-foot pole.”

“Wish me luck,” Ryan said and disappeared into the hallway.

“Is this his first date since he got here?” Kayla asked.

Andrew spun back to his desk where his phone sat. “I think so, but I don’t pay attention to his every move.”

Kayla pointed at the screen. “Are you alone tonight, Rebecca? I haven’t seen your roommate anywhere.”

“I guess.” Rebecca turned and looked around. “Don’t know why I’m looking. It isn’t like there’s room for her to hide in here. I’m a little worried. She’s always here.”

“I thought it was weird that we were talking in your room,” Andrew said. “Everything okay?”

“Who knows?” Rebecca shrugged. “Polly tells me I have to be patient. It’s not fair that you have this great roommate and do stuff with him on the weekends and I have a dud.”

“At least she isn’t bringing boys back to the room,” Kayla said. “That would be awkward.”

Andrew laughed out loud. “We can always tell when one of the guys has a girl in his room. His roommate begs for an extra bed.”

“An extra bed in your dorm room?” Rebecca frowned. “All the beds on our floor are occupied.”

“On the weekends,” Andrew said. “When people go home.”

“I would never let someone else sleep in my bed.” Rebecca turned and looked at her bed. “But how would I know if they made it the next morning? Talk about gross. All those dirty germs hanging out just waiting to jump all over me.”

“Isn’t it bad enough that a hundred other people have slept on that mattress?” Kayla asked.

With a shudder, Rebecca grimaced. “That’s why we bought a bag for it. All it took was for Henry to say that one time and I couldn’t get it out of my head.”

“Did you get one, too?” Kayla asked Andrew.

“When are you guys coming home again?” Kayla asked. “It is so boring around here without you.”

Rebecca smiled at her. “It’s only been two days.”

“You talk to us every night,” Andrew said.

“Like this.” Kayla gestured back and forth with her hand. “I’d rather see you in person. And eat pizza and have a movie on or something. I’d even rather clean your room, Rebecca.”

“Someday you should take a weekend off work and come down,” Rebecca said. “Maybe Andrew could come, too. I’ll even try to find you a date so we can all go out.”

“Have you met many dateable guys?” Andrew asked, his eyebrows rising into his forehead.

She grinned, tipped her head and fluffed her hair. “Of course I have. I’m cute.”

“That’s not giving me a lot of confidence.”

“Like you have anything to worry about,” Kayla said. “She’ll never leave you. Remember, you’re the one that did the leaving.”

He dropped his head. “Don’t remind me. Worst summer of my life. I don’t know what I was thinking.”

“That I was dull and boring,” Rebecca said.

“You’ll never be dull and boring,” Andrew replied. “You’re too smart to be boring. No, I was an idiot.” He stared at the screen. “I thought we’d quit talking about that summer.”

Kayla smiled. “Sorry. I shouldn’t have said anything. Will you really find me a date, Rebecca?”

“Why not? There are a ton of great guys here. Maybe you’ll meet one and want to come to Drake next year or even next semester.”

That blew the smile off Kayla’s face. “I’m not smart enough for Drake. They’d never accept me and I couldn’t afford it anyway.”

“You should at least take classes at the community college,” Andrew said. “And you could afford to come to Iowa. If you did that, maybe Rebecca would come visit both of us. At least I’d get more of a chance to see her.”

“I have as much trouble getting to Iowa City as you do getting to Des Moines,” Rebecca said. “When I can have a car here, I’ll be a lot more independent. Until then, I’m stuck.”

“You could always ride the bus.”

“Have you ever ridden on one of those buses, Kayla?” Rebecca asked. “They’re dirty and the people are scary looking and I’d never do that by myself.”

“So, maybe I’ll come to Des Moines and we can ride the bus to Iowa City together.”

Rebecca smiled. “I think she misses us, Andrew. Speaking of that – Andy? He calls you Andy?”

“Only to embarrass me. Usually I call him Ry-Ry when he does, but I wasn’t thinking.”

“Because we’re so distracting,” Kayla said. “I have to go back to the front desk. My break is over.”

“When are you going to leave the hotel and get your own place?” Andrew asked.

She shook her head. “I don’t know. I wish I did. Someone needs to tell me what to do with my life.”

“Rebecca’s good at that.”

“Hey,” Rebecca said. Then she grinned. “Yeah. I am bossy. Isn’t that what you always say, Kayla?”

Kayla glanced away. “I have to go now. Talk to you guys tomorrow.”

After she clicked off the call, Rebecca laughed. “She didn’t want to walk into that one.”

“What’s up with your roommate?” Andrew asked.

She blew out a frustrated breath. “I have no idea. When do I start worrying? She should have been back two hours ago. It’s not like her schedule changes. Ever. If she doesn’t follow every single detail on that thing, she cries.”

“It isn’t always crying, but she gets really down on herself if she misses something. Like the world is going to end.”

“She is so uptight.”

“You’ve said that. Have you asked whether anyone has seen her around?”

Rebecca shook her head. “No. I’ll give her another hour and if she doesn’t show up, I’ll talk to my RA. I’ll probably call Polly, too. Maybe she’ll know what I should do.”

“Wouldn’t you hate it if people worried about you just because you did something out of the ordinary, just for one night? You’d be mad at us if we called around and got everyone upset.”

“Yeah, but I’m not uptight and stuck to one schedule. I roll with the flow. This girl? There ain’t nothing that flows with her in it.”

“How long are you going to live with her?”

“Polly says I need to wait through the semester. If things are still weird, then I can talk about moving to another roommate. Who in the world thought it was a good idea for people who have never met each other to move in together?”

“Ryan and I are doing great. It’s been really fun.”

“Whatever. You aren’t helping.”

With a big sigh, Rebecca said, “I should let you go. We both have to study. I’ll call Polly a little later.”

“I always call you before I fall asleep.”

He smiled and tapped the screen. “It’s so nice that we get to do that. I can’t wait until we’re in the same house and can go to bed together. I want to hold you all night and wake up with your hair in my face.”

That all sounded horrible to Rebecca, but she knew he was trying to be romantic, so she didn’t say anything. “I love you, too, Andy.”

“Yeah. That’s gross, too. I love you, Andrew. Thanks for being such a good friend to Kayla, too. I love that the three of us can hang out together while she’s on break.”

“I don’t know, but someday she’ll figure it out. I don’t even know what I’m going to do.”

“But at least you’re being productive and learning while you decide.”

“I guess. Sometimes it feels like I’m spending money I shouldn’t spend.”

“Man, not me. Everything I learn is something I didn’t know before. You used to be like that.”

“College is hard. If you were here and we could study together and talk about all the things we’re learning like we used to, it would be way better. I really miss you.”