A Peek at my Mother’s Life

One thing about living as a transient pastor’s family is the risk you face when moving into a home you may have only seen once; a home over which you have no control and one where you’ll have to adapt all of your belongings in a very short period of time.

Living with my parents, we learned to adapt quickly and laugh through the foibles we encountered. Dad fixed what he could and he could fix a lot. Mom painted walls, covered countertops, cleaned out closets, did what she could to make it nice – and we learned the stuff-shuffle. For the most part, it was loads of fun, but there are always stories to be told. And really … where would I be without stories?

Mom thought she should start a journal. It looks as if she did so because she had no other way to deal with her frustration. However, it’s funny. The journal didn’t last any longer than the words you see here. They make me laugh.

Moving:
Frank gone to Conference – me alone with sick child, ear infections, no doctor, telephone or car. Finally, Diane cured, piled boxes of books in guest room, packed and packed – absolutely exhausted one hot night lying on bed with no sheet covering me – sound asleep. Suddenly mouse ran up my bare leg – screamed, shook him off and unable to sleep for rest of night. Sprayed all around with moth spray in great hopes that it would be effective on mice also.

After much heaving, packing, throwing and burning – got much stuff packed – Frank arrived home on Friday afternoon. I’d strained my back and had cramps in it that night. Had to keep yelling at Frank to awaken him to pull my back straight.

Great moving day.
Van arrived at 11:00 a.m. Amazed at such a small truck to carry our great load. Frank loaded VW and Studebaker. At 2:30, we took off. Frank had 3000 pounds of books, one goat and a petrified white Tom cat. I had Diane, more books, a black kitten, 3 goldfish and a turtle. I also had a flat tire 5 miles out of Knoxville and a useless jack. Things straightened out and we arrived in Bussey. The previous minister still loading – great hoards of people piling trash into pickups. Finally the man and his family left and the van gone, too with the promise to return and collect the rest of their belongings. Amazing amount of junk. I sat around on the living room floor with eight or ten of our new parishioners till 10:00 p.m. or so. Our van not in sight. Took a tour of our new house and nearly cried. Molding and mopboard in living room painted half-white and half cream – someone had lost interest in the middle. Living room floor refinished around a lovely little square where there had obviously been a rug, great jagged crack in the kitchen sink – the plumbing leaky and corroded – no electrical plug-ins upstairs – only bare hanging bulbs – no toilet upstairs – one downstairs. Kitchen unbelievable. 4 feet of counter space – linoleum worn thru to floor. Besides these small things, the windows, six footers with springs – not pulleys, kept falling down since the wood was worn out at the springs – most propped open by various lengths of wood. Coal furnace, etc. 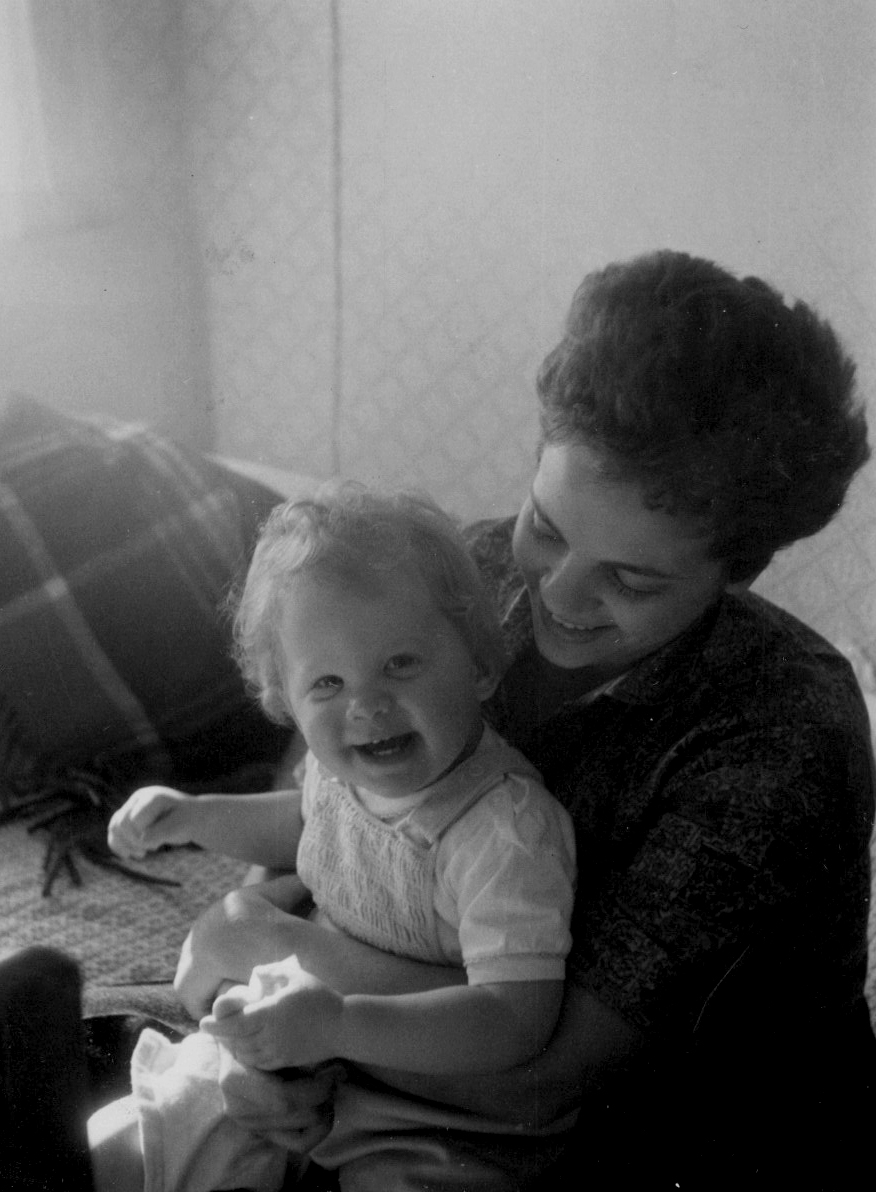 At first glance, this was all I saw – but knew there was a great deal more I didn’t want to see. At 11:30 still no van. The last of the loyal people left – with many invitations for bed and board – but we still had hopes of van arriving. At 12:30 a.m. we gave in – dragged car seats in from VW and curled up in them. Diane very uncomfortable, but asleep – Frank & I extremely so – but young enough to think it funny. Our new friends had stocked the refrigerator with eggs and pies and homemade bread and rolls – our neighbor brought us coffee and rolls and since the minister’s wife before us had neglected to check the bottom of the stove, we had a plentiful supply of pots and pans the next morning.

At 10:00 a.m. our van arrived – seems the movers didn’t get the van packed till 3:00 a.m. However we later discovered the biggest reason was not the small size of the van as they claimed, but the constant little breaks the two movers kept taking at the local tavern. Naturally, it would be difficult to fit a large load of furniture in a small van especially if one couldn’t see straight.

At about the same time on Friday, the parsonage committee arrived – all set to find out the major and minor repairs we would like. Frank told them very bluntly that he had lived in parsonages all his life – but had never seen one in worse condition. They appeared surprised – but after a tour of the place agreed heartily. Several suggestions made – and by Monday night at the official board meeting, the church people decided almost unanimously to build us a new house before Fall.

After that it didn’t seem so terrible to live in that dreadful old house. At least we had the prospects of a new one within 4 or 5 months.

The first Sunday after taking up occupancy was a hectic one. Frank had to hurry off early in order to find his way to the other two churches. As he passed thru town, he noticed a body lying partly in the gutter. Being a good Christian gentleman, he stopped to see if he could help. Our neighbor’s 17 year old son was lying there dead drunk. Aid soon arrived and I caught sight of him later being dragged unconscious onto his front lawn – where he was rather unceremoniously left lying for at least 4 hours. There was no sign of hide nor hair though when the sheriff arrived later in the afternoon. This, of course, wasn’t a very happy portent of what our neighbors were like, though I later found the rest of the family to be very pleasant. I never have discovered what the head of the house looked like. He always had a layer of coal dust on his face.

Meanwhile, our goat was a great attraction to all the children in town – and the adults too were fascinated. Rachel was a very friendly goat – except that she was jealous of my two year old daughter – she tried to knock Diane down every time she turned around. Diane soon was scared to death to go out without me. The goat had a fatal complex – she thought she was human. I’d raised her since she was a week old – and she had been allowed to sit on my lap and be petted like a little child. The fear my daughter had developed finally forced me into giving Rachel away – a sad day for me, but a joyous one for Diane.

(Aside: I refused to say the goat’s name – Rachel. It was Zhuhbee for some reason. And for as many years as Mom was alive, she always insisted that Dad had given her a choice that day – to get rid of the goat or her daughter. She said it was a difficult choice. This was living with Margie Greenwood!)

A little earlier, our big old Tom Cat had developed some dreadful disease and Frank finally had to dispose of him. I had given away the 3 goldfish and the turtle to the neighbor children – they smelled so and we were left with the small kitten. Diane took care of him. She beat him up regularly till he was the meanest small kitten one could ever find. You had to be careful how you walked, because he would stalk you and pounce on your ankles, kicking, biting and clawing. He went the way of the rest of our pets – I gave him away too, along with 10 cans of cat food.

Diane decided to help keep things active, so she proceeded to eat some aspirin and had to have her stomach pumped out. Then she ate some medicated hand cream – who knows what else she managed to get into – I locked everything up after that.

Work on our house was progressing rapidly – it was started at the beginning of Sept. and we were in at least partly by November 1st.

A funny story from last year about the first Mother’s Day after my mom died. We really do find humor in the strangest things.

And then, there is this bit that Mom wrote about being a minister’s wife. You’ll love it.