There is so much Bellingwood swirling around in my mind these days as I prepare for publication of Book 12, that I can’t stop thinking about the characters. It’s easier to just write their stories. So you get another vignette. And yes, there will be a fifth vignette in the email newsletter on Friday morning. 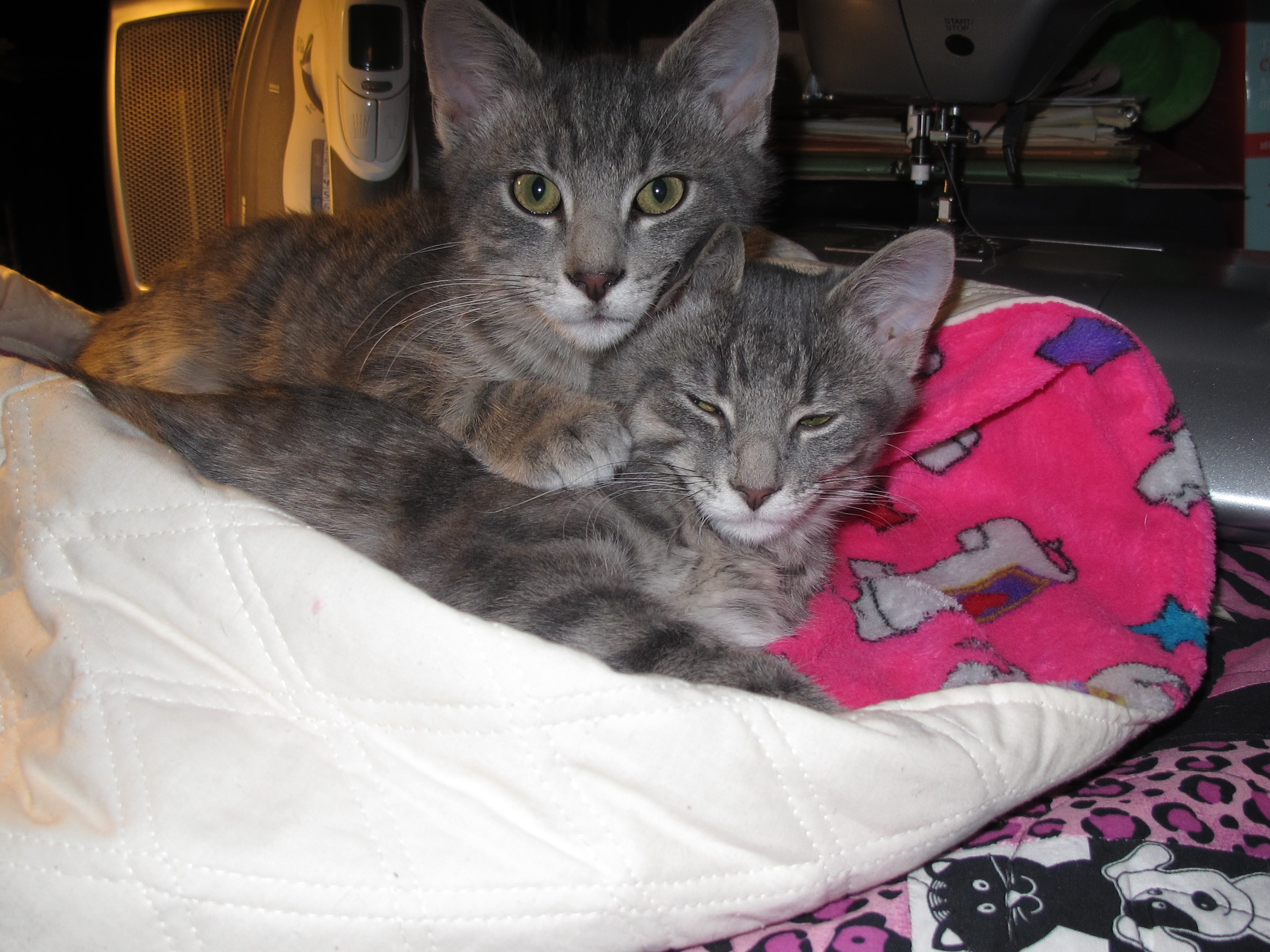 And the kittens in my life – oh, the kittens. Earl and Grey are growing. It’s hard to believe how much they’ve changed in the last two months. They have such independent little personalities. Since they’re growing up together, they are affectionate with each other, with me and with TB whenever he’ll let them. Grey insists that he let her in. She’ll just lie down beside him and I think he’s a little like Heath in this story. He likes it, even if he doesn’t want to admit it. Earl is a bit more tentative, but I catch him walking past TB as close as he dares and then rubbing his neck against the older cat. It’s pretty cute.

More Than Meets the Muffin

Heath turned over in bed and groaned. Another day. They were all the same. He got up, rode the bus to school, spent the day knowing that he’d get harassed by somebody, rode the bus back to Bellingwood, scooped crap out of horse stalls, did homework and went to bed so he could start all over the next day.

At least Rebecca liked him. Everybody else either hated him or tiptoed around him, afraid that he was going to turn into a monster or fall apart. Hayden told him that he needed to suck it up because at least he was safe. Polly and Henry tried to be nice to him, which was better than his aunt and uncle. Rebecca was the only one who understood. Her mom died only a few months ago. He still didn’t get why she was so happy.

“Let’s go, sleepyhead,” she yelled at him after knocking on his door. “Don’t wanna be late for the bus!”

He smiled and sat up. He couldn’t believe he had a sister now. Then he felt his face return to normal, the smile long gone. She wasn’t really his sister. And if she knew all of the things he had done when he was with Ladd and Abby and Andy, she wouldn’t like him. Bile rose in his throat. Abby was dead. Ladd would have killed them all if he thought they were going to tell on him. At least the cops caught him before he hurt anybody else.

Heath pushed the sleeve of his pajamas back and looked at the scar on his forearm. That was from the night they broke into the old shoe store the first time. Ladd made him punch through the glass. It bled all over the place. He’d wrapped it up with rags they found in the store, but it didn’t heal for a long time. He couldn’t tell his aunt about it. She would have poured alcohol on it while he stood there trying not to cry.

He’d stolen her antibiotic cream and ripped up old t-shirts for bandages. He still wore long sleeves so no one would see the scar. Even Polly hadn’t seen it yet.

“Move it, you bum,” Rebecca yelled. She rapped on the door again. “Polly made breakfast. You don’t want to miss this.”

“Coming.” He grabbed jeans up from the floor and shook them out. They’d be fine today, but he took a fresh t-shirt out of his dresser. Polly caught him every time he tried to wear one a second day. He hadn’t had this many clothes since…

He couldn’t think about that. Every time he thought about his parents, he had a hard time coming back to the real world. He missed them so much. His mom loved getting ready for school in the fall. She took one whole day with him and they went to Des Moines. Their first stop was always for clothes because he hated that the most. Then they’d buy shoes. His favorite stop was Office Depot. It wasn’t because he loved paper and folders, pens and pencils; it was because she did. He smiled and brushed away a tear when he thought about that. The last time they went, she’d grabbed his hand and tried to skip with him through the front door. He was too old for that. But deep down inside, he wished he’d just done it. She was so happy.

Heath lifted a stack of t-shirts and touched the blue spiral notebook he’d managed to keep hidden from his aunt. His mom had written a note in the middle of it, assuming that he’d find it one day when he was working on an assignment. She’d drawn a big smiley face and put curly hair on it. Then she drew a bubble with the words “I love you, Heath. Always do your best – it’s what you are meant to be. Remember that I’m proud of you every minute of the day.”

He couldn’t look at the page anymore. It hurt too much. Heath slammed the drawer shut and put his t-shirt on.

Rebecca pounded on his door. “Are you going to make me come in after you?”

She gave him her best innocent face and then crooked her finger for him to bend down. He wasn’t that much taller than her, but he did what she asked. She ran her fingers through his hair, straightening it around his face.

“Don’t whatever me. Did you finish your book last night?”

He stepped back into the bedroom and grabbed up his backpack. “I finished what I was supposed to read.”

“I want to read that when you’re done. And then we should watch the movie.”

Rebecca glared at him and he grinned. “Because reading is better for you. And it’s a classic.”

He really was enjoying the book. “To Kill a Mockingbird” was much better than “King Lear.” Heath couldn’t believe all of the books Polly had on her shelves. When he came home with the list of books at the beginning of the semester, she showed him where every one was located. And she’d read them all. But then she had been a librarian. That was probably required for her to get a degree.

His mom read books, but mostly she went to the library for them. She always wanted him to check out books with her, but he didn’t do that either. Wow, he’d been a terrible kid. All of those years he could have made her life easy and he didn’t. It wasn’t fair. He wanted to tell her how sorry he was, but it was too late. It was always too late.

“Good morning,” Henry said when they walked into the kitchen.

Polly stepped out from the kitchen. She always looked like she wanted to hug him. He wished she would sometime. Just do it and get it over with so he could hug her back. But she stopped herself. “Juice?” she asked.

He dropped into the chair where he always sat and nodded again, then took the glass from her.

“I made muffins and there’s egg casserole. I tried a new recipe and it smells wonderful,” she said. “Rebecca, will you get plates and silverware?”

“Thanks,” Polly said. She nodded at the stove where the casserole dish was sitting. “It should be cool enough now. But hot pads are there. Would you grab it?”

He brought it over to the table and put it on the trivet she’d set in front of his place.

Rebecca put plates down beside it and Polly brought over a basket covered with a cloth. She pulled back the cloth and Heath sat back in his seat.

“What are those?” he asked.

His voice must have sounded off because they all looked at each other and then at him.

“No.” He was afraid he’d cry if he tried to talk so he bolted out of the room. He stood in the doorway to his bedroom, his hand on the door sill, trying to slow his breathing.

“What’s wrong, Heath?” Rebecca asked from behind him. “Do you really hate lemon poppyseed muffins?”

“They’re my favorite,” he replied. “It just brought back a memory.” Yeah. A memory of every Sunday morning when his mother made them. She always put three on his plate because she knew just how much he loved them.

Rebecca came up beside him and put her hand on his back, rubbing it slowly. “I hate those memories. But Polly didn’t know.”

“We’ll take them away if you don’t want them.”

“Do you want to talk about this?”

“It’s okay to be normal. I cry a lot when I think about my mom. You should try it sometime.”

Heath looked at Rebecca and smiled. “I don’t think so. Come on. I’m fine. Let’s go have breakfast.”

“I’m not kidding. You should cry.”

“Maybe sometime I’ll let you hit me in the gut and then I’ll cry because you’re so strong and you really hurt me.”

Rebecca swatted at him. “Now you’re just being silly.” She pushed him back into the dining room.

Polly and Henry were still sitting in the same place. He could tell they’d been talking about him because they stopped in the middle of a sentence and both looked at him when he walked in.

He sat back down in his seat and took a muffin, split it open and breathed in the scent. It threatened to overwhelm him again, but he choked back the tears.

“They’re his favorite,” Rebecca said. “I bet he hasn’t had them in years.”

Polly reached over and touched his arm. “Someday you’ll have to tell me some other things that are your favorites. You know I love to cook.”

Heath nodded and took a bite of the muffin. It was perfect.

Rebecca put two more on his plate and winked at him. “You have a few years of these to make up for.”